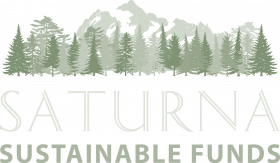 Are Your Investments at Risk of Becoming Stranded Assets?

At one point or another, we have all heard the saying “out with old, in with the new.” We do not need to look too far in this modern technological age to find cogent examples, including:

File
Are Your Investments at Risk of Becoming Stranded Assets?

Former Chairman of the Federal Reserve Alan Greenspan used the term creative destruction in his 2007 memoir, The Age of Turbulence: Adventures in a New World. Originally coined in Joseph Schumpeter's Capitalism, Socialism, and Democracy (1942),¹ creative destruction denotes a "process of industrial mutation…that incessantly revolutionizes the economic structure from within, incessantly destroying the old one, incessantly creating a new one."² Mr. Greenspan expressed sympathy for the stresses and challenges that creative destruction can have on people's lives in his July 2005 US Senate testimony to the Committee on Banking, Housing, and Urban Affairs, in stating, "The problem with creative destruction is that it is destruction, and there is a very considerable amount of turmoil that goes on in the process."³

With this in mind, we are beginning to see early signs of creative destruction taking place in segments of the energy extraction industry, specifically the coal extraction and coal energy generation industries. Their structural demise may foreshadow obsolescence or nonperformance over the long-term, eventually leaving investors with stranded assets. If these assets do become obsolete or significantly impaired, companies will be required to reduce their recorded value on financial statements resulting in an accounting charge against the firm's equity reserves. This would diminish shareholder value and potentially the firm's ability to service its debt obligations. Under such a scenario a firm may become so financially impaired that its operations suffer or bankruptcy becomes the only relief.

While opining on the merits of creative destruction is outside of the scope of this piece, it is fair to expect that humankind's ongoing pursuit of technological evolution will persist alongside entrepreneurial endeavors, seeking opportunities in a highly competitive global market economy. It's akin to the continual, evolving state of nature and humankind's desire to advance. Despite its seemingly brutal outcome, some benefits have been realized, such as improved health care and enhanced standards of living.

What brutal outcome awaits the coal industry, and what benefits will arise from its creative destruction?

There are five primary drivers for the decline of coal energy generation and the coal extraction industries in the US: aging and decrepit coal plants, burdensome compliance and regulatory trends, cheaper alternative sources of energy, changing consumer and supplier preferences, and the fossil fuel divestment campaign.

In 2014 there were a total of 491 coal-powered plants in US, down from 580 in operation in 2010, representing a 15% decline over the five-year period.4 Despite this decline, coal energy generation still represents a significant source of power generation in the US — approximately 33% of the country's total power source in 2015.5 It is also interesting to note that the average age of US coal power plants is 42 years with the 10 oldest, and least efficient, built between 1943 and 1949.6

From a regulatory perspective, coal-sourced energy plants face considerable headwinds that are likely to become even more onerous and more expensive for the aging fleet.

For example, the US Environmental Protection Agency adopted the Mercury and Air Toxics Standards (MATS) in 2012 requiring power plants to incorporate the "maximum achievable control technologies" aimed to limit emissions of mercury, acid gases, and toxic metals. About 175 of the roughly 600 power plants in the US South and Midwest missed the 2015 deadline to meet MATS requirements and obtained an additional year to comply. The EPA estimates the annual cost for these utilities to attain compliance is $9.6 billion per year.7

Additional regulatory rules are coming down the pipeline as well. In August of 2015, the EPA released a prepublication of its Clean Power Plan which seeks to reduce carbon dioxide (CO2) emissions for utilities to 32% below 2005 levels by 2030.8 These actions appear to be in coordination with the December 2015 Climate Conference in Paris, known as COP21,9 reflecting an effort by nearly 200 nations to reduce carbon emissions. The agreement, which has yet to be implemented, will create a legally binding process in which countries create staged five-year emission reduction plans with stringent reporting requirements; the long-term goal being greenhouse gas neutrality by the second half of the century. In light of the heightened regulatory environment and increased operating costs to meet these stringent standards, some utility operators are simply opting to close down operations rather than incur the costs to upgrade and comply.

Coinciding with these regulatory trends is the rise of cleaner-sourced, alternative energy solutions, such as solar and wind energy, that are cheaper and far more efficient than in the past. With subsidies, utility-scale solar energy can cost as little as 5.6 cents per kilowatt-hour, with wind energy even lower at 1.4 cents. By comparison, natural gas and coal cost 6.1 and 6.6 cents per kilowatt-hour. Even without subsidies, alternative sources remain competitive at 7.2 cents for solar and 3.7 cents for wind. The proliferation of lower-cost natural gas only adds to the market pressures for coal utilities and extraction operators.

Consumer and energy supplier trends have also shifted away from coal-sourced energy, preferring cleaner and more cost-effective energy-producing methods. A 2015 article published by Bloomberg asserts that "the world is now adding more renewable energy power each year than coal, natural gas, and oil combined." The article identifies that in 2013 the world added 143 gigawatts of renewable electricity capacity, compared with 141 gigawatts from new plants that burn fossil fuels.10 In the US, steam coal consumed for generating electricity declined 29% from 2007 to 2015. According to the US Energy Information Administration, Ohio, Pennsylvania, and Indiana have experienced dramatic declines of 49%, 44%, and 37%, respectively, over the 2007-2015 period.11 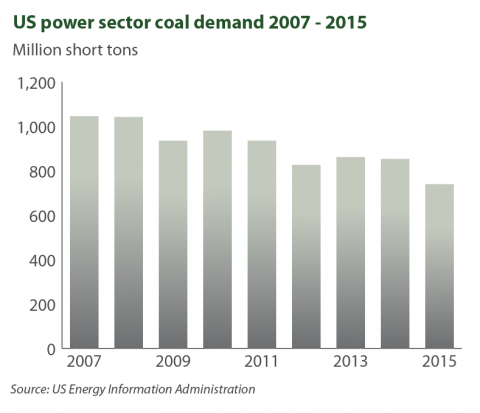 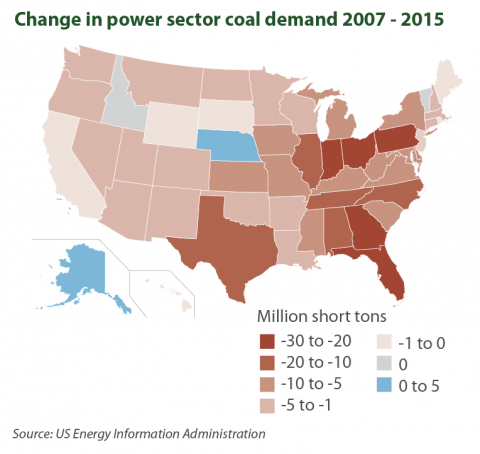 Lastly, the fossil fuel divestment campaign, an investment theme that advocates avoiding and selling hydrocarbon operating and asset-owning companies, has been gaining broad momentum at an exponential rate. The divestment campaign was sparked by Bill McKibben's 2012 article for Rolling Stone Magazine, titled "Global Warming's Terrifying New Math," in which he articulates the mathematics of the Earth's finite ability to absorb carbon emissions. McKibben introduces the concept of an Earth "carbon budget" and the resulting implications for rising temperature trends and our climate.12 As founder and senior adviser of 350.org, a nonprofit named for its goal to reduce carbon particulates in the Earth's atmosphere to 350 parts per million, McKibben has been a lightning rod, galvanizing institutional investors, including university endowments, pension funds, state investment pools, and sovereign wealth funds, to divest their investment holdings in hydrocarbon-intensive companies. The campaign has gained merit among investors and beneficiaries based on two primary arguments. The first argument advocates raising the external cost of capital for extraction industries in an attempt to alter their core business practices or at least place greater emphasis on clean energy solutions. The second argues that these assets will become stranded, hence worthless or significantly impaired, if legislative trends reduce or cease hydrocarbon extraction.

The fossil fuel divestment campaign has galvanized institutional investors to divest their investment holdings in hydrocarbon-intensive companies. The campaign has been extremely successful.

The campaign has been extremely successful, reporting a total divestment commitment among institutional investors with assets in excess of $3.4 trillion.13 Among the more notable signatories include the largest US pension funds, California Public Employees' Retirement System (CalPERS), California State Teachers' Retirement System (CalSTRS), and Norway's Sovereign Wealth Fund, the world's largest sovereign wealth fund sourced by oil revenues. These funds decided to strike a more balanced response by divesting from all coal extraction industries yet retaining their investment interests in non-coal hydrocarbon extraction and asset-owning industries.

We are beginning to see signs confirming that the coal energy generation and coal extraction industries are experiencing a downward long-term shift in the US. These industries are facing intensely competitive market pressures in response to a popular zeal that seems only to be gaining greater momentum.

While there is no certain outcome, it does appear that the coal extraction and coal energy generation industries' demise may be self-fulfilling prophecy.

Over time, investors may become disinclined to invest in a sector facing increasing regulatory costs and declining demand.

Coal and coal energy suppliers find themselves in a truly precarious position. Their operations likely do not offer sufficient business diversification opportunities, whereas their power generation clients can re-establish a different energy-operating source and remain a going concern.

Some long-term stranded asset trends are more observable than others. Take, for example, the demise of large hard-bound, annual encyclopedia editions that were gradually made obsolete by nearly ubiquitous, low cost, easy access to the internet. Industries not readily observable to the casual consumer, such as coal extraction or steel milling, may not resonate as interesting. However, being attuned to these evolving, creative destruction trends serves to protect your investments.

While avoiding certain industries can be part of the solution, we also seek to own companies that set themselves apart from their peers. 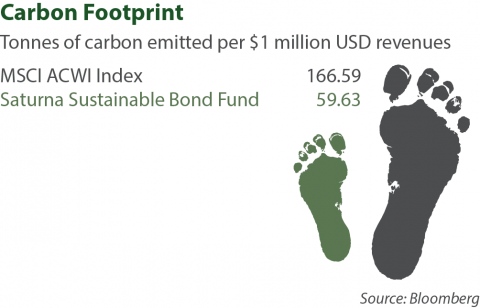 As an example, the Saturna Sustainable Bond Fund owns NextEra Energy, headquartered in Juno Beach, Florida. NextEra is the fourth largest utility operator as measured by power generation, coming in at 42,500 megawatts. At year-end 2015, NextEra Energy Resources was the world's largest generator of renewable energy with more than 12,000 megawatts of wind generation capacity and nearly 1,000 megawatts of solar generation capacity.14 The firm also reported that it achieved its lowest-ever emissions rates of sulfur dioxide, nitrogen oxide, and CO2 in 2014 — rates that were 97, 79, and 55 percent lower, respectively, than industry averages.15 Power usage and generation are ongoing needs. In 2015, NextEra Energy was ranked as the top "green utility" in the US and fourth in the world.16

Saturna Sustainable Bond and Equity Funds support the divestment campaign by avoiding ownership of the largest hydrocarbon asset holding firms. One of the attributes underscoring our sustainability focus is that we look to reduce and monitor our investment portfolios' carbon footprints. We use the MSCI All Country World Index as a proxy for comparative ESG results for the Saturna Sustainable Bond Fund.17 We are pleased to report that as of June 30, 2016, the Saturna Sustainable Bond Fund compares favorably to the index. The Fund achieves a carbon footprint roughly one-third of the benchmark's as measured by tonnes of carbon emitted per one million dollars of revenues. 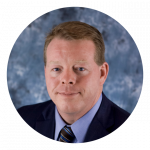