Owaiz Dadabhoy: Yeah. So many great reasons to, you know, put money into a Donor Advised Fund. One of the things I see, I know people that make contributions to forty, fifty different organizations each year. Some people do twenty, some people only do one or two. But for the folks that are waiting, now, right? Because tax time is here and they are waiting for those receipts to start coming in, they have to do that every year. And they have to, you know, every time somebody comes to them to ask them for a contribution for the, you know, the organization that they are representing, they have to make a decision, right? They have to answer back to them. But you know, when you have a Donor Advised Fund, a couple of things happen. You get that one receipt and it’s for the full amount, whether it’s all used or not that year or the next year or whenever it’s used. And then the second thing is, if an organization comes to you, you can take it a little bit slower and say, look, I’m going to go to my Donor Advised Fund and talk it through with them and see if, you know, your charity is listed, and then I’ll make a decision on it. So, another thing is, you know, if you have more money to put aside and you want to grow your charitable dollars, as Muhi was talking about, you can do that. So, if you know that you’re paying $10,000 a year in zakat, but you have an account that has $50,000 somewhere, just a checking or savings account. You can put that into a Donor Advised Fund, take the tax deduction, and then, you know, over time, as your money is hopefully growing, you can start to pay that out on a regular basis. So, we will take more questions a little bit later on. I wanted to wrap up the presentation here and then go to your questions. You know, one of the most often asked questions is, “Alright, I just opened up a traditional IRA or a SEP IRA or what have you. I did it in a rush because I had to get it in before tax time. I just put it all into this one fund. Which fund am I supposed to select?” Well, you can go to AmanaFunds.com and on that main page you will find what’s called the Amana Fund Selector. You answer a few questions and then based on your answers, it will give you a suggested, you know, way to allocate your money. But you can also use this if you’ve been investing for a long time. Maybe you started in the 80s or 90s or early 2000s and you put it all into the funds that existed at that time. Income and Growth. And you never consider the other ones. Go take the quiz and you can, at that point, re-allocate your money, especially if it’s in a qualified account where you’re not going to get taxed for selling something. So, qualified accounts are the ones we talked about, right? The ones that have tax benefits. IRA, ESA, HSA, 401(k). So, do take a look at that and if you have questions, please contact any of us. You have our email addresses here and you also have our extension numbers. This is our team of people that can assist you. You know, of course, also call the 800 number that’s listed—800-728-8762—and speak to someone there or visit our website. Now, I want to get to our questions. I actually couldn’t see any of them because I was the one presenting.

Muhi Khwaja: So, there’s a question about matching gifts from companies to a Donor Advised Fund. Many of them have policies that they want to make sure that the end recipient receives the matching and not necessarily be invested long-term because the corporate giving, they want to make sure they are getting the funds out to the charities of your choice. So, we make sure that, you know, if we do receive matching funds, that those are funds that go out the door and are not invested. So, we try to make it as easy as possible for the employee instead of them having to fill out five, ten different requests, we can still honor that but with the understanding that it is money that will go out the door that year and not be invested so that we are abiding by their policies.

Attendee: Yes, so can we convert our current 401(k) to your portfolio? 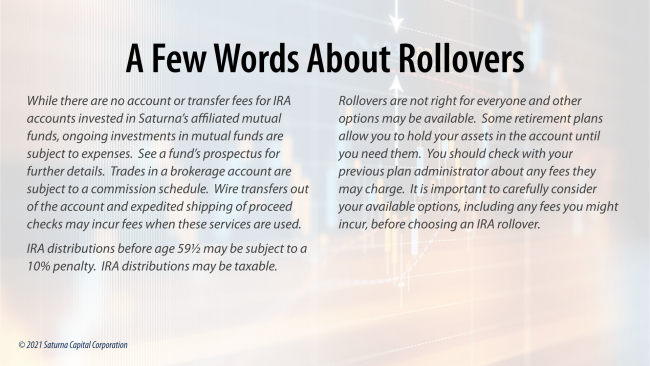 Attendee: A question I have regarding Donor Advised Funds, when making the donation... a person makes the donation, say $1,000, but when does it get distributed to the charities? Is it at the discretion of the advisory board or at the donor’s?

Muhi Khwaja: Yeah, that’s a great question. Thank you for asking. So, any family who has a Donor Advised Fund, they make their contribution to the DAF and then on a monthly basis, we distribute to charities. So, as long as they fulfill our distribution form, let us know they want to send the funds to the charity, we will fulfill that gift on a monthly basis. On Ramadan, we do two distributions: one in the beginning, one in the last 10 nights. In December, we do two distributions just because that’s another time that a lot of donations go through. So, we will fulfill all of those gifts. Our primary method is an ACH bank transfer to the charities, especially with COVID-19, you know, checks aren’t getting picked up in the mail and things like that. So, we try to make it as efficient as possible for the charities to receive the funds.

Attendee: The follow-up would be... can we say that, “Okay distribute my donations in month of Ramadan only?” Can that be done?

Muhi Khwaja: Yeah, of course. You get to decide when the distributions are made, and we will fulfill it based on your timeline. So, you can put in the funds December 31 of this year and get the tax deduction for 2021 but then you can say, “Make all of these distributions in Ramadan,” and in the meantime, in those three to four months, you can have it invested. You can have... you know, so many different benefits to consolidating your giving and then distributing them to the charities of your choice.

Owaiz Dadabhoy: Alright, do we have any other questions that somebody would like to unmute and ask?

Muhi Khwaja: In the chat... “What if the charity is not on your list for distribution?” We ask all non-profit organizations that are not listed in our directory to fill out an eligibility form and when they do, we will then send the funds to that charity.

Owaiz Dadabhoy: So, the Participation Fund. The question is, “Is that only for people that are older?” Now, the reason why you might think it’s for people that are older is because as you get closer to your goal of retirement and you’re starting to pull out money, you don’t want to have all of your money in the stock market, right? Because let’s say you have $500,000 in your retirement account and you’re pulling out $50,000 a year, but let’s say there’s a dip in the market, like when the pandemic hit in March of last year, the markets were down and then they recovered later. If you’re pulling out money in March, you’re going to be upset that your investment has gone down in value. So, the better thing to do is to have some money in the Participation Fund which doesn’t move as much, historically speaking. And so, it has a different type of risk scenario with it. But it’s not only for older people, it’s also, let’s say your child is getting closer to college education, right? They’re actually going to be starting college and so you’ve been saving all of these years and now you want to take some of it out of the stock funds and put it into the Participation Fund, so that money, you can withdraw in the next year. And the year after, you can move more money into the Participation Fund so it will be available for you when you need to withdraw it at that point. With that, if you have any further questions, please reach out to us directly. We can also go through the performance page and, you know, show you a little bit more about that, or any other questions that you might have. Contact Muhi on the numbers that he had shown you and shared with you in chat group as well. Or, of course, you can contact any of us at Saturna. 800-728-8762. We will look forward to seeing you next month. It will be during the month of Ramadan so we hope that you will join us. And early Ramadan Mubarak to all of you.

Please consider an investment’s objectives, risks, charges and expenses carefully before investing. To obtain this and other important information, which you should carefully consider before investing, about the Amana Funds in a free prospectus or summary prospectus, please visit www.amanafunds.com or call 1-800-728-8762. 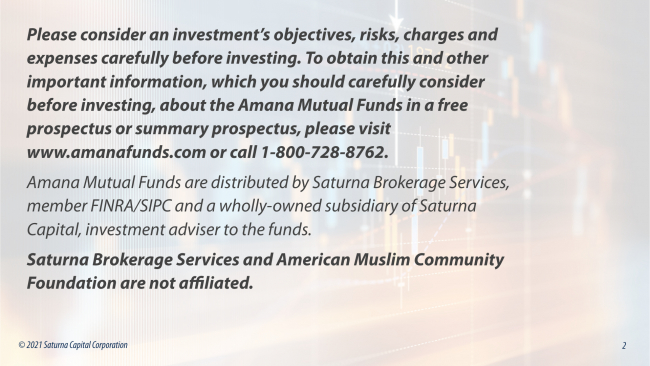 The Amana Funds are distributed by Saturna Brokerage Services, member FINRA/ SIPC and a wholly-owned subsidiary of Saturna Capital, investment adviser to the Amana Funds.

This material is for general information only and is not a research report or commentary on any investment products offered by Saturna Capital. This material should not be construed as an offer to sell or the solicitation of an offer to buy any security in any jurisdiction where such an offer or solicitation would be illegal.

We do not provide tax, accounting, or legal advice to our clients, and all investors are advised to consult with their tax, accounting, or legal advisers regarding any potential investment. Investors should not assume that investments in the securities and/or sectors described were or will be profitable. This podcast is prepared based on information Saturna Capital deems reliable; however, Saturna Capital does not warrant the accuracy or completeness of the information. Investors should consult with a financial adviser prior to making an investment decision. The views and information discussed in this commentary are at a specific point in time, are subject to change, and may not reflect the views of the firm as a whole.

All material presented in this publication, unless specifically indicated otherwise, is under copyright to Saturna. No part of this publication may be altered in any way, copied, or distributed without the prior express written permission of Saturna.