August 4, 2019 – The Wall Street Journal profiled the Amana Mutual Funds and featured Scott Klimo’s views as Chief Investment Officer of Saturna Capital, adviser to the Amana Funds. The “Spotlight” article by Gerrard Cowan focuses on the characteristics of the Funds that broaden Amana’s investor appeal beyond the Muslim community.

Cowan elaborates on the Funds’ investment guidelines, which are in accordance with halal investing principles of the Quran, and overlap significantly with ESG (environment, social, and governance) investing. In line with other socially responsible investment guidelines, the Amana Funds avoid investments in tobacco, alcohol, gambling, weaponry, and pornography. Amana’s investment process also emphasizes “the integrity of management at the companies it invests in,” Mr. Klimo adds.

Cowan identifies as significant the Funds’ avoidance of interest, “meaning they don’t feature traditional financial services,” and that the Funds seek companies with low debt. Both of these guidelines are specific to Islamic investing principles and help to differentiate the Funds from other socially responsible options.

“Investing by these principles has brought financial benefits, according to Amana. For example, avoiding financial firms was a boon during the global financial crisis, while companies with low debt levels can fund their own operations, making them more stable financially,” Cowan wrote.

Klimo believes these traits have attracted non-Muslims to the Funds, stating th

at Saturna’s research indicates “only about “40% to 45% of Amana’s investors are Muslims.”

When asked about the limitations of Amana’s guidelines and the potential for concentration risk, or lack of diversification, Klimo noted that historical performance tells a different story: “The annualized standard deviation of returns seen by the funds – a gauge of volatility – has been lower than that of the S&P 500 over the past 15 years.” 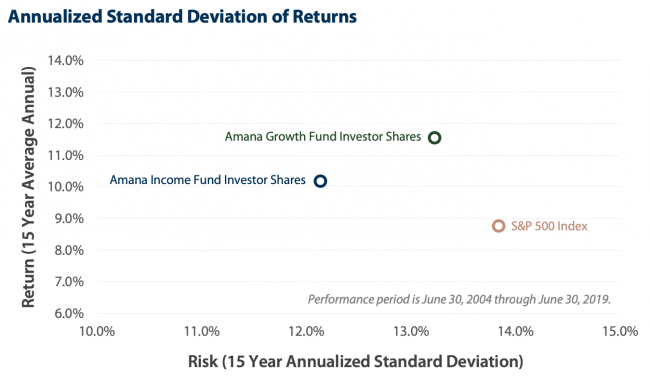 Expense ratios shown are as stated in the Funds' most recent Prospectus dated September 28, 2018.

Performance data quoted represents past performance which is no guarantee of future results. Investment return and principal value of an investment will fluctuate so that an investor's shares, when redeemed, may be worth more or less than their original cost. Current performance may be higher or lower than performance data quoted. Standardized returns current to the most recent month-end can be obtained by visiting our Month-End Returns Page or by calling toll free 1-800-728-8762.

The Amana Funds limit the securities they purchase to those consistent with Islamic and sustainable principles.  This limits opportunities and may affect performance.  Fund share prices, yields, and total returns will change with market fluctuations as well as the fortunes of the countries, industries, and companies in which it invests.  Foreign investing involves risks not normally associated with investing solely in US securities.  These include fluctuations in currency exchange rates, less public information about securities, less governmental market supervision and the lack of uniform financial, social, and political standards.  Foreign investing heightens the risk of confiscatory taxation, seizure or nationalization of assets, establishment of currency controls, or adverse political or social developments that affect investments.

While diversification does not guarantee against a loss in a declining market, it can help minimize the risk of the decline of a single market.

The S&P 500 is an index comprised of 500 widely held common stocks considered to be representative of the US stock market in general.